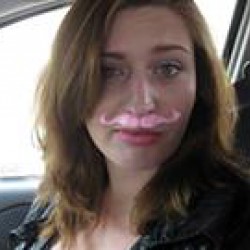 A book-lover reviewing books? Unheard of! A life-long reader with aspirations to write her own novels? How cliché. A full-time university student balancing pleasure reading, blogging, studying varying topics, personal interests and a real life? Things could get interesting...
0 BOOKS

So for my first Booklikes post I thought I'd summarize a few of the books I've been reading lately. Mostly I read textbooks for university, but considering I'm not counting those as pleasure reads, we'll forget them (until my grades drop drastically). As for fiction and novels that have been in bed with me lately, let the list begin!

This book has been one of my favorites since I first picked it up in 2011. Erin Morgenstern is a genius, and the appeal of this book cannot be denied. It's the result of National Novel Writing Month (an annual literacy awareness campaign wherein people from all over the word write 50,000 words in the month of November to promote illiteracy awareness. I've competed and won a couple times, it feels great!)

The Night Circus is about, well, a circus. A traveling 19th century circus which appears without warning. It is only open from dusk until dawn, and is a public venue for two magically inclined competitors, sworn and bound to compete against one another until a victor is declared. New tents are constantly appearing in the circus, filled with wonderful, sensory illusions.

Frost Bitten is actually from the middle of a supernatural book series I consider guilty pleasure reading. I own the entire series, from the anthology to Men of the Otherworld. This particular book sat on my shelf for several years, and although I have reread this series several times, I somehow always managed to skip over Frost Bitten, and never realized. Three nights ago, I realized, and in delight, plunged into this "new" book. I was up until 3 am on a school night, devouring the final chapter. Can't say I regret it, either.

The Otherworld series is about female supernaturals, everything from werewolves to witches to a necromancer. There's plenty of gore, bitch-calling, and unrealistic sex scenes. I wouldn't call any of the books in the series a "feminist read," but there is a hell of a lot of girl power in a series about female protagonists who kick bad-guy ass and look good doing it. The whole Otherworld series by Kelley Armstrong is the ultimate post-breakup, PMS indulge fest reading material!

In all honesty, I haven't finished this book yet. While it's written by literary mastermind Diane Setterfield who also penned The Thirteenth Tale (the reason I requested an advanced reader copy of Bellman & Black) I don't know if I like this new, unreleased novel as much. I'm struggling to get through it, feeling obligated to finish it and review it because I requested it and was accepted, and not wanting to read it out of obligation. So here we are, a few chapters in, and consciously comparing the opening pages to its predecessor. I'll get back to you on this one.

This book is an anomaly. It's mind-blowingly original, creative, inspired, and ultimately, a brainteaser. As the title suggests, it's a book about the wife of a time traveler, who is left behind every time her husband travels. He often goes to visit her childhood self, causing pause for thought: did they meet because he randomly traveled back to her childhood; or did they meet because she ran into him in his present and caused such a disturbance in his life with her previous history and knowledge of him? Can there be one without the other?

This book makes me feel like a philosophical quantum physicist which is just ridiculous: I'm actually a closet romantic. Of course this novel is also a love story, they married after all. It's dramatic and chaotic and unusually funny. Time travellers, of course, can't take anything with them. Not even their clothes. Good thing Henry doesn't need glasses. Or have any sexual piercings....